Blognotes from a photographer life... 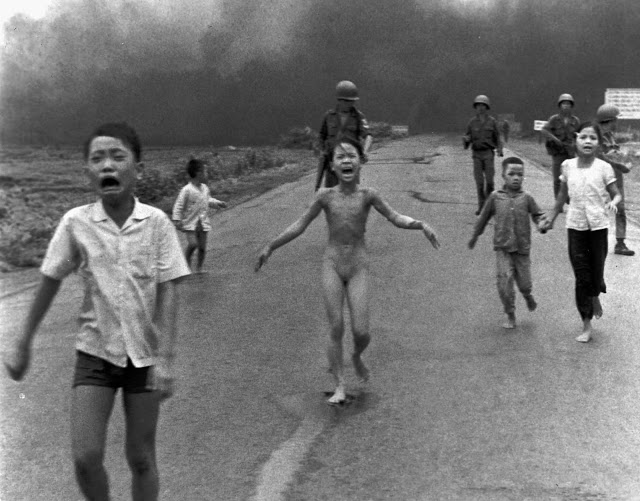 This is a post that will move some reaction, and probably many will think there is something personal.. My intentions wish to go much further then individual photographers experiences and stories.
When I see war images nowadays I mostly see stories shoot while embedded within an Army, or escorted by some force. There are some personal and regional exception, of course, and sometimes I see a story as "seen and told" from the "other side".
In certain cases it might be the relative facility to access a difficult situation (and also the relative safety) to induce the photographer to go this way, but the larger reality is that the big guys have learned the lesson and are avoiding the old mistakes.
It's well known that the US lost the Vietnam war more for the protests back home then for the Vietcong fighters. They just don't want this to happen again. So they will not allow photographers and journalists to go too close to certain realities, and even less to tell the story from the opposed side. This is understandable, but not acceptable.
We hear frequent reports of civilian victims in Afghanistan due to mistaken military actions, but I have never seen photos of those victims. In Vietnam the Mylay massacre on the contrary sparkled open discussions and criticism on certain behaviour of the army toward the population.
Even worse, introducing the concept of privacy (in a war? Please! nothing is private for a soldier in a war!) the governments are now asking not to publish images of wounded or dead soldiers (even their coffins going back home were off-limits to reporters). Again, you may remember how impressive were the photos of actual wounded and suffering young Americans in Vietnam.
The worst part though is the general assumption that there are no doubts on the rightness of an action or a war, or better, no doubts should be stated in the media. Of course I'm not defending the Talebans, or Saddam Hussein, but I have never read of any possible argument the other side could stand for. There was open criticism on the rightness of the Iraq intervention, but never a discussion on principles.
Going back to war photography today. I see very good images of "our" soldiers in action, their tensions, some interactions with civilians. Some of these works are really strong (think of the Restrepo documentary), and telling these stories is good. But it's an incomplete panorama for most of the reportages I see: where are the civilians? Where are the enemies? Where are the consequences of the fights on both sides?
If photojournalism will not fight to get it's independence back it will lose all it's credibility and, in the end, all the interest from the narrow market left for it. But, above all, it's a matter of intellectual and human freedom that is at stake here. We criticise China for it's media control without seeing that the Western media are even more "controlled". We have to get it back! Us, the photographers.
at 11:29 AM

Innovation distinguishes between a leader and a follower
(Steve Jobs)

Travel is at its most rewarding when it ceases to be about your reaching a destination and becomes indistinguishable from living your life. (Paul Theroux)

Twenty years from now you will be more disappointed by the things that you didn't do than by the ones you did do. So throw off the bowlines. Sail away from the safe harbor. Catch the trade winds in your sails. Explore. Dream. Discover. (Mark Twain)

"War does not determine who is right - only who is left."

"The good life is one inspired by love and guided by knowledge."

"A hallucination is a fact, not an error; what is erroneous is a judgment based upon it."

"I say quite deliberately that the Christian religion, as organized in its Churches, has been and still is the principal enemy of moral progress in the world."

"Italy, and the spring and first love all together should suffice to make the gloomiest person happy."

"A life without adventure is likely to be unsatisfying, but a life in which adventure is allowed to take whatever form it will is sure to be short."

"The secret of happiness is to face the fact that the world is horrible."

"It is preoccupation with possessions that prevents us from living freely and nobly."

"The secret of happiness is this: let your interests be as wide as possible, and let your reactions to the things and persons that interest you be as far as possible friendly rather the hostile."

"Men are born ignorant, not stupid. They are made stupid by education."

"The infliction of cruelty with a good conscience is a delight to the moralist. That is why they invented Hell."

"The whole problem with the world is that fools and fanatics are always so certain of themselves, and wiser people so full of doubts."

"Right discipline consists, not in external compulsion, but in the habits of mind which lead spontaneously to desirable rather the undesirable activities."

"If all our happiness is bound up entirely in our personal circumstances it is difficult not to demand of life more then it has to give."

"Man needs, for his happiness, not only the enjoyment of this or that, but hope and enterprise and change."

"Anything you're good at contributes to happiness."

"The fact that an opinion has been widely held is no evidence whatever that it is not utterly absurd."

"It is possible that mankind is on the threshold of a golden age; but, if so, it will be necessary first to slay the dragon that guards the door, and this dragon is religion."

"Let's not pretend that things will change if we keep doing the same things. A crisis can be a real blessing to any person, to any nation. For all crises bring progress.
Creativity is born from anguish, just like the day is born from the dark night. It's in crisis that inventive is born, as well as discoveries, and big strategies. Who overcomes crisis, overcomes himself, without getting overcome. Who blames his failure to a crisis neglects his own talent, and is more respectful to problems than to solutions. Incompetence is the true crisis.
The greatest inconvenience of people and nations is the laziness with which they attempt to find the solutions to their problems. There's no challenge without a crisis. Without challenges, life becomes a routine, a slow agony. There’s no merit without crisis. It's in the crisis where we can show the very best in us. Without a crisis, any wind becomes a tender touch. To speak about a crisis is to promote it. Not to speak about it is to exalt conformism. Let us work hard instead.
Let us stop, once and for all, the menacing crisis that represents the tragedy of not being willing to overcome it."

When you set out on your journey to Ithaca,
pray that the road is long,
full of adventure, full of knowledge.
The Lestrygonians and the Cyclops,
the angry Poseidon -- do not fear them:
You will never find such as these on your path,
if your thoughts remain lofty, if a fine
emotion touches your spirit and your body.
The Lestrygonians and the Cyclops,
the fierce Poseidon you will never encounter,
if you do not carry them within your soul,
if your soul does not set them up before you.

Pray that the road is long.
That the summer mornings are many, when,
with such pleasure, with such joy
you will enter ports seen for the first time;
stop at Phoenician markets,
and purchase fine merchandise,
mother-of-pearl and coral, amber and ebony,
and sensual perfumes of all kinds,
as many sensual perfumes as you can;
visit many Egyptian cities,
to learn and learn from scholars.

Always keep Ithaca in your mind.
To arrive there is your ultimate goal.
But do not hurry the voyage at all.
It is better to let it last for many years;
and to anchor at the island when you are old,
rich with all you have gained on the way,
not expecting that Ithaca will offer you riches.

Ithaca has given you the beautiful voyage.
Without her you would have never set out on the road.
She has nothing more to give you.

And if you find her poor, Ithaca has not deceived you.
Wise as you have become, with so much experience,
you must already have understood what Ithacas mean.

Get your own Widget